First off, when it comes to American comedies I seemed to have developed a rather thick skin because it has been harder and harder to entertain me with physical and vile humor. I’m not saying this is all what American humor is, but let’s face it, there’s a lot of bodily harm and jokes about body-parts or body-fluids that are present in the comedies nowadays. It’s funny at times, I get it, but looking at the big picture, I do get annoyed sometimes. That being said, Neighbors half fell into one of those categories of annoyance and though I still enjoyed Efron, Franco and Rogen, there was something missing and it simply didn’t wow me.

The plot starts off by introducing us to Mac (Rogen) and Kelly (Byrne), first time parents with the cutest baby ever, having to be forced to live next door to a fraternity house lead by Teddy (Efron) and Pete (Franco). At first, Mac and Kelly try to reason, being friendly with the young man in order to keep the parties low on volume and not to blast the music until the early hours of the morning. This is something that the fraternity obviously does not do at all and therefore, the backstabbing and scheming commences! Now, while this plot seems refreshing and there’s an interesting dynamic between two young Hollywood hunks and Rogen, part of me can’t get past the logic: why wasn’t the whole neighborhood troubled by this?

Neighbors does attempt to explain this situation by showing the fraternity guys bribing the old ladies around the block but that just doesn’t justify the unlimited amount of parties the boys threw throughout the movie. One of which was the Robert DeNiro’s character party – coolest thing ever! Dave Franco’s impression of DeNiro from Meet the Parents was spot on and it was one of the highlights of the movie for me, in addition to the rant Efron and Franco had after they had a fallout over a girl. There was so much tension between them during that scene that I almost expected Franco to kiss Efron in the end and I was sad that he didn’t, what a waste of gay potential. 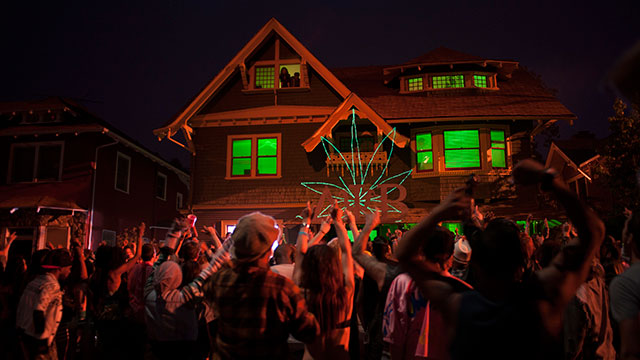 To be completely honest, I think Franco stood out more to me than Efron, I mean, he looks as good or even better and he’s a pretty good actor. Though I haven’t necessarily loved the movies his been in, I have never thought to say anything bad about him in particular so I’m excited to see him soon in 22 Jump Street! And when we’re already on the subject of “not saying bad things”, can we all just agree on never hating on Seth Rogen? That guy is simply adorable, no matter what he does or how he does it, no matter how the movie turns out, Rogen just shines and I love him!

But loving the actors behind the characters should not be a reason to love the movie itself. While Neighbors does make you laugh and sometimes succeeds effortlessly (the airbag scene, the I wasn’t a sleep one-liner), I wouldn’t necessarily say it is the best comedy this summer. No, there is going to be a better one and I have a feeling it’s going to be Let’s Be Cops, which for me has a more appealing plot and well, Jake Johnson’s in it so, my argument is valid. That being said, the number one reason Neighbors most likely did not work for me was the lack of shared laughter.

The thing is, most comedies thrive on the fact that people get to sit in a theater and laugh together. To have the shared laughter of a hundred (or more) people just enjoying the movie is something special. I watched Neighbors with my best friend with just 4 more people sitting in the theater and none of them laughed at once (minus the guy who LOVED the I wasn’t a sleep one-liner way too much) – and it felt sad. I’m not saying this might be the reason of my neutral feelings towards Neighbors but I’m putting it on the table as a possibility. Laughter is contagious, so if nobody’s laughing, it’s harder for you to laugh and if everybody’s peeing their pants because it’s so funny, you might enjoy the movie a lot more compared to watching it alone at home.

In other words, Neighbors works on many levels as an entertaining comedy and there isn’t an actual reason why it shouldn’t be funny and hilarious. My rating is simply a matter of personal preferences mixed in with the rather underwhelming viewing experience and it might be totally different for everybody else. Besides, if not for the laughs, watch Neighbors for Rogen and Franco – they are worth it.