There is an itsy-bitsy-spoiler, dear readers!

Delusional sophistication that is making fun of hashtags, the need to be constantly online and connected, not to mention drinking Starbucks’ vanilla lattes for their logo not its contents. Hyper-addictive, mind altering and simply fantastic visually, verbally and more importantly, ideally, Mr. Robot is pushing us to think past what we’re used to and forcing us to think twice about society itself. Whether the view is a tad bit extreme, and whether the ideas are shown through drug use, insomnia, social isolation and with a hint schizophrenia, where the people Elliot Alderson talks to are the viewers themselves, doesn’t matter – the question is how far are we going to let society evolve into a mass production before we say fuck society!

For a man whose IMDb page is literally slim pickings, Sam Esmail has appeared into the spotlight by creating the biggest hit since, let’s say, True Detective. The difference being the fact that Mr. Robot is a meta-series that is questioning everything related to the following phenomena in society: liking the same things, loving the same things, giving hearts on Instagram etc. And hopefully, since Mr. Robot got renewed before it even premiered, it’s difference from last summer’s biggest TV hit will also be continuity in quality through its second season. So far, four episodes in, Mr. Robot has shown a level of creativity that is fresh and different but most importantly, it’s a little bit out of the box as well which gives it the freedom to have sequences where the meaning is hidden in between the lines. For instance, in episode four, the dream-state Elliot, our main protagonist, was going through had so many elements that raised even more questions, questions that Mr. Robot isn’t rushing to answer.

Among many thoughts, having no answers is kind of the main theme that is eating at me. After reading the theories of Mr. Robot being the TV version of Fight Club where Elliot is The Narrator and Mr. Robot Tyler Durden, the constant question in my mind has been, is it true? Episode after episode this understanding is nailed to my brain by the lack of interactions Mr. Robot has with everybody else except Elliot. And well, even the ones he does seem to have, exist only in Elliot’s mind when he is drugging himself numb. Whether I like this concept is another question I keep throwing at myself because though it seems like the show is moving towards that, I find myself wanting it to surprise me a little differently. Yet, I think it’s hard to find a bigger surprise in Mr. Robot than Rami Malek’s performance.

For Rami Malek, who has definitely been around, yet stayed under the radar, Mr. Robot is it! This is his Golden Ticket to where ever he wants to go because he is giving us everything and more as Elliot Alderson. Not only is his physical appearance believable from the emotionless expression to the bags under his eyes, his performance has so many nuances due to the complexity of the character that it’s a joy to see him attack each scene with immense versatility. For my own pleasure, and I’m sure for many others, the fact that Malek’s voice is soothingly calm and almost hypnotic makes the narrating in Mr. Robot beyond tolerable and takes that element into a realm of loving every moment I get to hear him ramble about society, E(vil)-Corp and the fact that he is unable to connect with the world and most importantly, people.

In short, as I think discussing the plot is inevitable, the show is about Elliot Alderson as a protector as well as a destroyer. His social-anxiety and inability to connect with people, has lead him to be a hacker, who not only works in a company that is paid to protect E-Corp, but also secretly helps to put away guys who, for instance, contribute child-porn. But his protection of E-Corp is contradicting, as he despises the company and what it stands for, which is why, when Mr. Robot (Christian Slater) approaches him with a plan to take down E-Corp, Elliot joins said man’s created vigilante driven fsociety. The series has so far liquified a little from that focus but it’s too early to say how far the concepts of saving and destroying will take Elliot and fsociety. One thing is for sure, I wouldn’t mind seeing more of E-Corps Senior Vice President Tyrell Wellick who is as compelling as our main character. The quality of Martin Wallström’s work, who portrays said rigid and mysterious villain, is almost as high as Malek’s work and raises the quality of the show to evil heights. 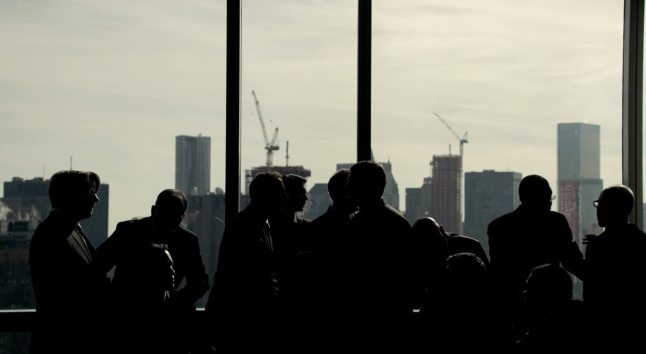 I want to add that one of the aspects that makes the plot tolerable and interesting, is that the show itself doesn’t aim to reveal and explain everything at once. And while some of the characters are constant elements of each episode, Wallström’s presence isn’t as prominent and that adds to his mysteriousness. What appeals the most though is the fact that the main storyline is gradually followed, and yet, many little stories appear in each episode making the content more rich and intense. Plus, there is the added factor of Elliot’s drug use that complicates not only his character’s existence but the narrative of the show, making the viewer as disoriented as Elliot. This makes me wonder how highly Mr. Robot is focusing on the viewer, not just by having Elliot speaking to us, but by not explaining things past Elliot’s understandings and therefore leaving us in an unsure state of mind together with our narrator.

Now that most of the show has been described to a certain extent, it’s time to gush about the cinematography because oh wow, I think it’s the most esthetic show since Suits but even better! The thing I loved about Suits (and probably still would if I watched it), is that when it starter it was like a breath of fresh air in the TV realm. It was its sharpness, its clarity, the cold vs. warm color schemes and the crisp style that appealed to my senses and now, Mr. Robot is perfecting the same kind of style. Though the color scheme is dominantly dark and broody, as is Elliot’s state of mind, there are two other factors that I haven’t really seen before in such great detail than in Mr. Robot: focus and composition. I’ve purposely tried to incorporate images that reflect focus and composition in this post but the reality is, these two are the highlights of the shows’ cinematography by Tod Campbell and Tim Ives. Most importantly, the way the series is shot, the way it alternates between showing everything and yet, showing so little, influences the way I, as a viewer, construct my understandings about Elliot and his world. And like I’ve mentioned before, there are many elements working for that greater good of elevating the viewers’ experience through visuals as well as the narrative, that it’s not hard to imagine Elliot’s reality into reality and feel his frustration towards society.

These are few of the reasons why I love Mr. Robot and I could go on for hours talking and discussing how the composition of the frame and the focus on the background is constructing Elliot’s reality, but it would be much more appealing to see it for oneself. Mr. Robot is an intelligent show, with a superior idea that everything we love is just a mass production designed to be loved and controlled by men in suits being controlled by men in more expensive suits. It’s a world of control over everything while our protagonist is the opposite – having almost no control at all if he didn’t hack the lives of the people he knew and/or wanted to protect. In short, Mr. Robot is a great show and somehow Rami Malek makes it even better.

PS: I forgot to mention the soundtrack, which is by Mac Quayle, the man linked to Drive and Spring Breakers which should be enough to imply that the music is as wonderful in Mr. Robot than everything else.

11 thoughts on “fsociety is Taking Over”