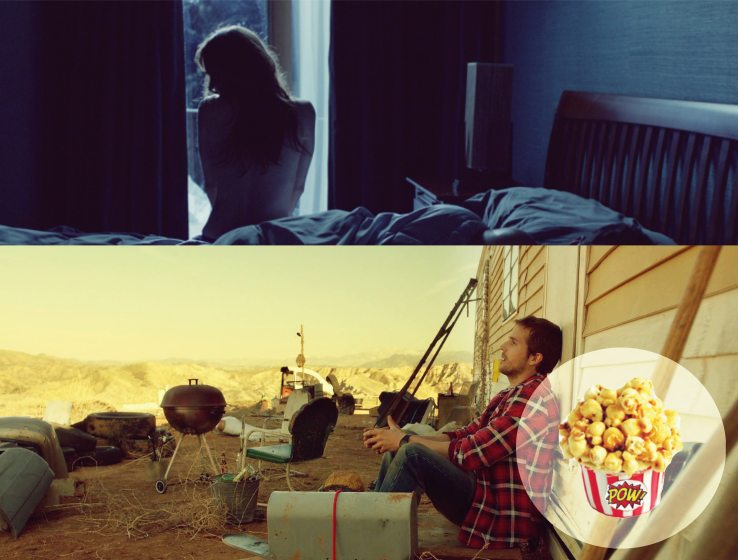 Blame it on the lack of a Y-chromosome, or the fact that I was mentally charged by hormones, but after watching In Your Eyes for the first time, I gave it another viewing straight after. So in a span of less than four hours, I had seen it twice, and you know what, I wouldn’t mind watching it again because I have fallen in love with this movie!

This surprisingly fresh love story is written by Joss Whedon, a name I wouldn’t usually pair up with the genre of romance, nor the lack of action. Yet, Whedon tells a story of two seemingly normal people, adds a sci-fi element that does not lead to secret government agents hunting them down, and voila´, a great love story appears. Add a not so experienced director Brin Hill, mix in some Zoe Kazan’s charm, throw in a dark-eyed cutie named Michael Stahl-David and that double X-chromosome will be rejoicing for days.

Rebecca Porter (Zoe Kazan) is living a mundane life with a husband who doesn’t seem to appreciate her – in other words, he is an asshole. Dylan Kershaw (Michael Stahl-David) is an ex-convict on parole, living in a trailer in New Mexico while working a dead-end job. The two have been connected since childhood, having unexplained effects on each other until one day they just click. Obviously they are a little shocked at first, but since they have had this feeling of somebody always being there, on the back of their minds, they get used to the idea fairly quickly. They don’t question it, they don’t try to analyze it.. they just talk until they fall in love.

In Your Eyes is probably a perfect example of a movie I love to love. It is sweet, funny and it isn’t a conventional love story due to the fact that the two main characters are mentally connected. It’s a sci-fi take on true love, or soulmates, where the two are able to experience each others emotionally charged experiences and communicate without picking up the phone. In Your Eyes is weird, and quirky, and because the casting is brilliant, it doesn’t become cheesy nor stupid, but delightful and wonderful. And as you can tell by my use of extremely positive adjectives, I love it too much to find any flaws in this movie.

Though, a part of me wants to scream at the ending, which in a way wasn’t good nor bad, I still find it fitting for this specific movie. For a person who isn’t fond of romantic movies, and finds them too darn cloying, In Your Eyes balances itself by having an open ending. Though, since this particular movie became a huge favorite right from the beginning, I wouldn’t actually mind a sweet ending but I’m fairly content with the one I got. Besides, the movie does leave a promise of a better future so that’s at least something to hold on to.

As mentioned earlier, the casting is on point with Zoe Kazan taking the lead as the shy and quiet Rebecca. This is the kind of character that is almost tailored for Kazan, who more than once, has played an introverted woman not aware of her own beauty. She is adorable and the more I watch her movies, the more I fall in love with her because she comes of genuine and likable every time. With Michael Stahl-David it’s another story because it was the first time I’ve seen this guy on a screen, yet, I liked him right away. Sure, part of his appeal is the well written script that allows him to be witty and charming, but another is the fact that he looks like the boy next door.

That is another big part of the movie’s appeal, the fact that both characters are fairly normal, and almost ordinary among the unrealistic setting. If Kazan and Stahl-David weren’t in this movie, and if it were a classic Hollywood romance movie with Zac Efron and Jennifer Lawrence, it would fail miserably. The charm In Your Eyes gains from its script is complimented by the cast and that’s why it works so well. And it makes me happy to see that these kinds of charm filled romantic movies are on a rise (What If, Ruby Sparks, The Spectacular Now, Stuck In Love etc). It also makes me happy that I stumbled on In Your Eyes when I did, because I was completely in a mood for something charming, sweet and funny – which is everything In Your Eyes is all about!